LAGOS, Nigeria (AP) — Nigerian President Muhammadu Buhari spoke to the nation about the unrest that has gripped the nation in recent days but without mentioning the shootings of peaceful protesters at Lekki toll plaza on Tuesday night that prompted international outrage.

The military opened fire without warning on thousands of peaceful protesters singing the national anthem Tuesday night, killing at least 12 people, according to Amnesty International.

The shootings have been widely condemned but Buhari did not speak of them at all during his Thursday address, instead urging calm.

Demonstrations began early this month with calls for Nigeria’s government to shut down the Special Anti-Robbery Squad, a police unit known as SARS. The squad was launched to fight crime, but it carried out torture and killings, according to Amnesty International.

But on Tuesday night security forces fired without warning into crowds of thousands of protesters singing Nigeria’s national anthem, killing 12, Amnesty said. The Nigeria military has denied shooting at the protesters.

Looting and gunfire continued in Nigeria's second-largest city on Thursday.

THIS IS A BREAKING NEWS UPDATE. AP’s earlier story follows below.

LAGOS, Nigeria (AP) — Looting gangs stormed through parts of Nigeria's largest city Thursday, spreading violence for a second day in Lagos in the wake of two weeks of peaceful protests against police brutality.

Plumes of smoke rose from a prison where gunfire could be heard, and a resident of the neighborhood where the Ikoyi Correctional Center is located, Tunde Oguntola, said he heard gunshots as soldiers and police officers put down what appeared to be an attempted jailbreak.

Police spokesman Olamuyiwa Adejobi told The Associated Press later Thursday that an incident inside the prison “has been put under control as our men have moved in there to assist prison security.” He did not describe the nature of the disturbance or say if anyone had been killed.

Gangs continued to vandalize properties in Lagos, he said. The police spokesman distinguished the “hoodlums” from the thousands of demonstrators who had been peacefully protesting police brutality on the city's streets.

Scores of rioters broke into a warehouse and stole food. Gunfire was heard in several parts of Lagos. By the afternoon, eight people with bullet wounds had been taken to Ikeja General Hospital, said a medic who spoke on condition of anonymity for lack of authorization to speak to journalists.

In other parts of the sprawling city of 14 million, the streets were empty and shops were shuttered, as residents largely obeyed a government curfew meant to curb the chaos. Protesters active on social media disavowed the violence, saying their demonstrations had been hijacked by criminals.

The #endsars demonstrations began early this month with calls for Nigeria’s government to shut down the Special Anti-Robbery Squad, a police unit known as SARS. The squad was launched to fight crime, but it carried out torture and killings, according to Amnesty International.

The government has agreed to disband the unit, but the protesters broadened their demands to include more widespread reforms to end human rights abuses and pervasive government corruption.

Nigeria has massive oil wealth and one of Africa’s largest economies, but many of the country’s more than 200 million people live with high poverty levels and without basic services because of rampant graft, according to rights groups.

The protesters who were on the streets earlier blocked traffic throughout Lagos and other cities in Nigeria but were peaceful, although 10 people died during the demonstrations, according to Amnesty International, which accused authorities of using unnecessary force.

But on Tuesday night security forces fired without warning into crowds of thousands of protesters singing Nigeria's national anthem, killing 12, Amnesty said. The shootings drew international outrage and new attention from around the globe to the protests.

President Muhammadu Buhari — who has been largely silent about the protests engulfing his country — was set to address the nation Thursday night.

“We join others around the world in demanding the Nigerian government end the attack on protesters and we call for justice for those who have been injured and killed by all Nigerian forces,” said the statement from the Movement for Black Lives, a coalition of more than 50 grassroots groups that make up the broader Black American liberation movement.

Following a summertime surge of U.S. and international protests over the killing of Black people by law enforcement, the BLM activists said the reason Nigerians were demanding an end to SARS is the same reason Black Americans have called for the defunding of police.

“The epidemic of police violence against Black people in a country led by Black faces proves what we have said time and again: violence imposed by law enforcement is about more than a few bad apples, the institution itself is irredeemable and exists to use violence to maintain a false sense of order in an unequal and unjust society,” the statement read. “We are one movement, one people, and we stand with the people of Nigeria.”

Also Thursday, the U.S. State Department issued a statement strongly condemning “the use of excessive force by military forces who fired on unarmed demonstrators in Lagos, causing death and injury."

"We welcome an immediate investigation into any use of excessive force by members of the security forces. Those involved should be held to account in accordance with Nigerian law,” the State Department said.

International Criminal Court prosecutor Fatou Bensouda said her office in the Netherlands was closely following the events around the current protests in Nigeria and the reaction of Nigeria’s law enforcement and security agencies.

"Any loss of life and injury is concerning. We have received information alleging crimes and are keeping a close eye on developments, in case violence escalates ... I call for calm and restraint.” 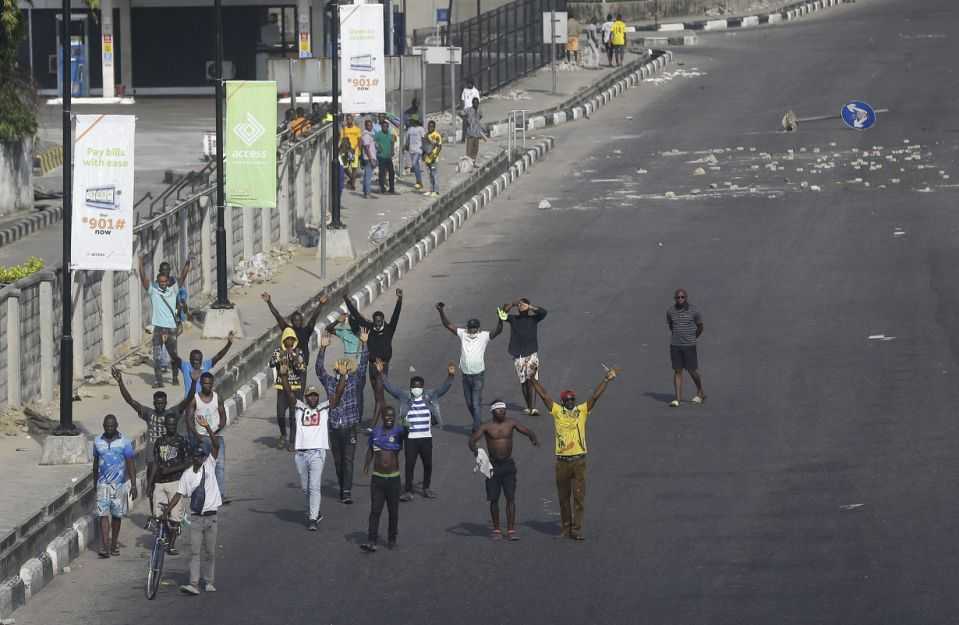